Parishioners and friends gathered together following the Vesperal Liturgy on Sunday, November 7th  to welcome into the Holy Orthodox Faith, through the mystery of Holy Baptism, the newly illumined Raphaella Fightmaster. We congratulate Raphaella, her family, and her sponsors in the faith, Alexis and Nicholas Bellack. May her path always be blessed and may she be a pious and humble defender of the faith following in the example of her patron, St. Raphael the Archangel! 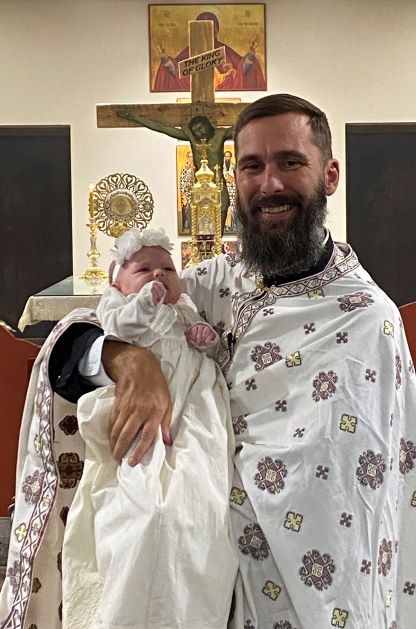 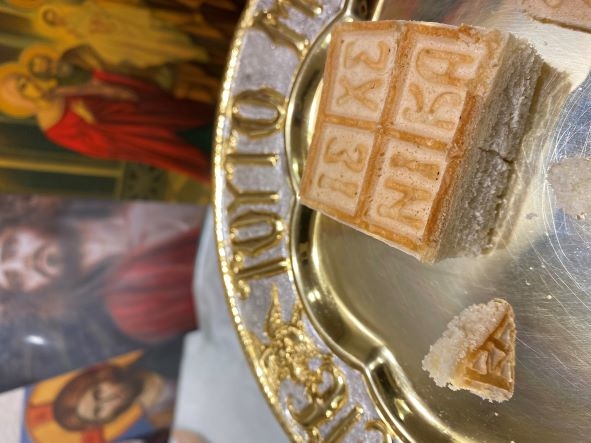 The Holy Archangel Raphael is an angel whose role is that of providing healing to the earth and to its inhabitants, hence his name whose etymology is Hebrew-Rafa’El, and meaning is "It is God who has healed." He cares for the convalescence of the ill and serves as the unseen guide for those who are travelling diligently with important chores. The Holy Archangel Raphael is one of the seven Archangels who stand before the throne of the Lord, and one of the only three mentioned by name in the Bible. He is celebrated, by the Church, primarily on November 8, the Synaxis of Michael and all the Bodiless Powers of Heaven.

Below is the Synaxis of the Archangel Michael & the other Bodiless Powers: Gabriel, Raphael, Uriel, Salaphiel, Jegudiel, & Barachiel:

“All the Angels, according to the Apostle Paul, are ministering spirits, - sent forth to minister to them who shall be heirs of salvation - (Heb. 1:14). God set them as overseers of every nation and people, and guides to that which is profitable (Deut. 32:8); and while one Angel is appointed to oversee each nation as a whole, one is also appointed to protect each Christian individually. He commands them to guard them that hope on Him, that nothing should harm them, neither should any evil draw nigh to their dwelling (Ps. 90:10-12). In the Heavens they always behold the face of God, sending up to Him the thrice-holy hymn and interceding with Him in our behalf, seeing they rejoice over one sinner that repents (Esaias 6:2-3; Matt. 18:10; Luke 15:7). In a word, they have served God in so many ways for our benefit, that the pages of Holy Scripture are filled with the histories thereof. It is for these reasons that the Orthodox Catholic Church, wisely honoring these divine ministers, our protectors and guardians, celebrates today the present Synaxis that is, our coming together in assembly for their common feast to chant their praises, especially for the Archangels Michael and Gabriel, who are mentioned in the Scriptures by name. The name Michael means "Who is like God?" and Gabriel means "God is mighty." The number of Angels is not defined in the divine Scriptures, where Daniel says that thousands of thousands ministered before Him, and ten thousands of ten thousands attended upon Him -(Dan. 7:10). But all of them are divided into nine orders which are called Thrones, Cherubim, Seraphim, Dominions, Powers, Authorities, Principalities, Archangels, and Angels.”

Mikey is originally from Iowa, and after living in Colorado Springs for 8 years while serving in the United States Army, he and his wife Madison relocated to Cheyenne in ...[more]
“Our mission is to share Orthodox Christianity throughout Cheyenne and southeastern Wyoming. We do this by actively sharing the teachings of our faith, positively impacting the community through our charitable work, and enhancing the spiritual growth of our members.”

Mikey is originally from Iowa, and after living in Colorado Springs for 8 years while serving in the United States Army, he and his wife Madison relocated to Cheyenne in November of 2020. Mikey has been attending Holy Apostles since December of 2020 and was chrismated on June 27th of 2021.