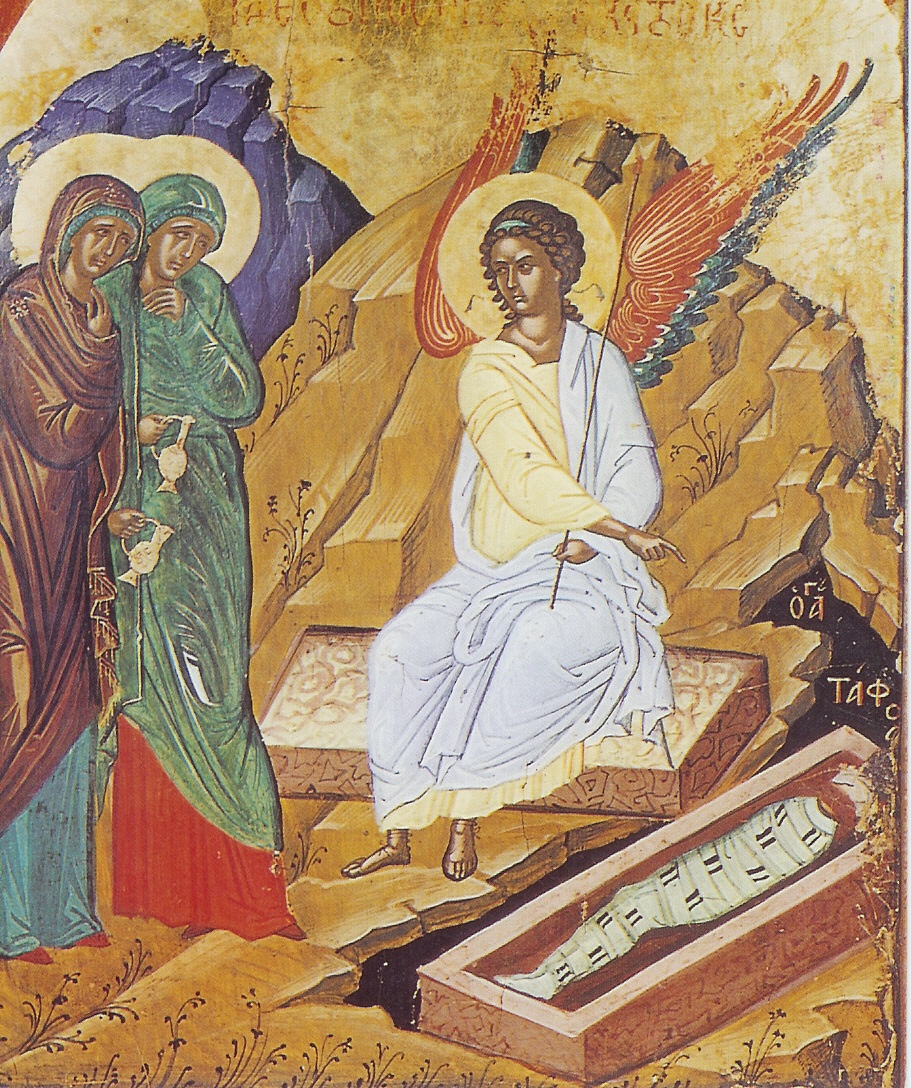 When it comes to the burial of Jesus, I think most of us just fast forward through it.  We skip it.  We are really into the details and the meaning of the cross.  And then we celebrate the wonder and beauty of the resurrection.  But the burial?  Nothing there, so we fast forward from the cross to the empty tomb.

Today the Church invites us not to act so hastily, so She has us stop and talk about the burial of Jesus’ body.  When Paul wrote to the Corinthians he summarized his gospel message into three points.  He wrote, “Christ died for our sins according to the Scriptures, that He was buried, that He was raised on the third day according to the Scriptures”(1 Corinthians 15:3-4).  Christ died.  Christ was buried.  Christ was raised from the dead.  If you ignore the burial, you are omitting 1/3 of the Gospel message.

You might expect some of the disciples to claim His body, but they were hiding in fear.  So Joseph of Arimathea and Nicodemus are the two unlikely undertakers who remove the body of Jesus from the cross, prepare His corpse, and carry it into the tomb.

The Italian Master Caravaggio captured this scene in his painting The Entombment of Christ.  Mary, the mother of James is seen lifting her hands in grief.  A young Mary Magdalene has her head bowed weeping into a scarf.  The Theotokos is depicted as an older woman wearing the habit of a nun, a little artistic license.  Joseph has grabbed the legs and Nicodemus is lifting the torso with his hand touching the wound in Jesus’ side.  There is a sense of urgency as they race to beat sunset when the Passover Sabbath began.

An artist has the liberty to sanitize a scene.  But imagine for a moment what a gruesome task they faced.  First they had to climb up and remove Jesus’ hands and feet from the nails embedded in the cross.  Then they had to lower His mangled body.  Jesus’ back had been ripped apart with a whip, water and blood had flowed from the wound in His side.  They had to remove the razor sharp crown of thorns.  I shudder when I think about this gruesome job.

Think about all that first responders, medical and law-enforcement personnel have to personally deal with when confronting a scene of violent death.  We admire them for the tough work they do.  But in that day, there was no sanitation.  What a selfless act of love!

We read in Matthew, “As evening approached, there came a rich man from Arimathea, named Joseph, who had himself become a disciple of Jesus.  Going to Pilate, he asked for Jesus’ body” (Matthew 27:57).  Matthew adds three important details we don’t find in Mark.  First, Joseph was a rich man.  Second, it was Joseph’s tomb where the body of Jesus was placed.  And most importantly, Matthew tells us Joseph was a disciple of Jesus.  John tells us Joseph was a secret believer because he feared the Jews.  So it took a lot of courage for him to publically identify himself as a friend of Jesus to Pilate the governor of the district.

Maybe you consider yourself a secret disciple at your workplace because you’re afraid of what others may think if you told them.  There really isn’t any such thing as a secret believer.  Either the secret will destroy the belief, or the belief will destroy the secret.  And fortunately in Joseph’s case, his love for Jesus destroyed his secret and he spoke up for Christ.

Nicodemus brought a mixture of myrrh and aloes, about a hundred pounds weight.  Taking Jesus’ body, the two of them wrapped it, with the spices, in strips of linen.  This was in accordance with the Jewish burial custom” (John 19:39-40).

There’s always a cost when you choose to follow Christ.  Joseph and Nicodemus had a lot to lose by claiming the body of our Lord.  By identifying with Jesus, they ran the risk of being expelled from the Sanhedrin.  Many of their old Jewish friends might reject them because of this association.  And by touching a corpse, both Nicodemus and Joseph rendered themselves unclean so that they would be prevented from participating in the Passover.

But they engaged in something better than a typical holy day:  They lovingly handled the real Passover Lamb from the foundation of the world now slain for our sake.

After washing the body, they wrapped it in the strips of cloth soaked in the gummy spices.  Then taking the single sheet, they covered His body and carried it to the tomb.  Not only were they unlikely undertakers they also became the pallbearers for the Messiah of God.  And what a burial!  No sermon, no chanting, no eulogies or even a Meal of Mercy.  But that’s OK, because in three days we will learn that a funeral service would have been premature!

Every aspect of the death of Jesus was prophesied in the Old Testament.  Isaiah predicted Jesus would pour out His life unto death and would be numbered with the transgressors.  That means he would be crucified with wicked men.  Usually the bodies were left to hang on the cross for many days.  Then they were removed and disposed of in a common burial site for criminals.

That’s what the Romans planned to do with the body of Jesus.  But a rich man, Joseph, stepped in and changed the assigned burial place.  Isaiah prophesied, “He was assigned a grave with the wicked, and with the rich in his death, though he had done no violence, nor was any deceit in his mouth” (Isaiah 53:9).  That’s an amazing prophecy!  So although Jesus’ body should have been in the assigned grave of the wicked, He was placed in a borrowed tomb of a rich man.  He just borrowed it because He wouldn’t need it very long!

John gives us a very important detail about the location of the tomb. “At the place where Jesus was crucified, there was a garden, and in the garden a new tomb, in which no one had ever been laid” (John 19:41).  There is a rock cliff in Jerusalem that looks like a skull.  It is located within 100 feet of a 1st century vineyard that contained a cistern capable of storing 200,000 gallons of water.  And less than 100 feet from that underground cistern is a tomb that has been cut into the limestone cliff.

It had to be a rich man’s tomb, because it has three chambers.  And the tomb was in a garden.  So why is that important?  In Orthodox theology Jesus is often compared to Adam.  The story of humanity began in a garden.  Adam and Eve were placed in a perfect garden to enjoy perfect fellowship with their Creator.  It really was paradise in every way.  But when sin broke that fellowship, the story was renamed “Paradise Lost.”  When Jesus entered the tomb in that garden, it was for us a Paradise Regained.

So, what’s the take-away of all of this?  In our baptismal service we read a part of Paul’s letter to the Romans in which he compares our baptism to the burial of Christ.  Paul wrote, “We were therefore buried with Him through baptism into death in order that, just as Christ was raised from the dead through the glory of the Father, we too may live a new life” (Romans 6:4).

Baptism symbolizes a burial.  In the early Church in the book of Acts, baptism was always reserved for believers only.  The Sacrament rests in this; that the person is plunged into the water in the name of the Trinity, and is lifted out again.   The baptism is a bath of the new birth and a drowning of sins.  Being taken out of the water is us mimicking Christ coming out of the tomb.  We identify with Jesus.