Believing Thomas
'My Lord and My God' 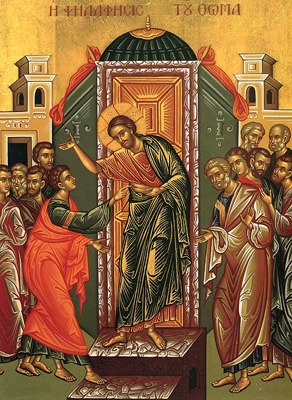 He was a man like any other, and there were many sides to him.  There really are few, if any, one-dimensional people around.  All of us are conglomerates of anger and love, of, hope and despair, faith and doubt.  He was just like that: a person of many qualities and feelings.

One time, Jesus proposed to go to Bethany in Judea because His long-time friend, Lazarus, had died.  A lot of friends tried to persuade Jesus not to go.  After all, it hadn’t been that long ago that the people of that region had tried to stone Him.  But Jesus was resolute, and so this man-of-many-sides stood up and announced: “Let us also go, that we may die with Him.” He was a loyal friend in the face of danger.
Another time, Christ was talking to His followers about His impending death.  This same loyal friend was confused and was seeking to understand the teaching.

Of all those present, he was the one to interrupt and ask candidly: “Lord, we do not know where you are going; how can we know the way?” He wanted desperately to understand because he wanted to follow.  The loyal friend had an honest curiosity and sought to satisfy it.

He was also a man of commitment.  Throughout the first 13 chapters of the book of Acts, we find his name among those who gathered in fellowship and prayer.  He was among those gifted with the Holy Spirit and sent to preach.  He was among those who devoted the rest of their lives to teaching in Christ’s name.  This loyal friend was also a martyr.  Thomas: loyal friend, honest questioner, devoted disciple, martyr, and doubter.  And it’s that last brand that is most often associated with his memory.

We’ve already noted that Thomas, like any of us, is more than one-dimensional; more than any one label can describe. Why, then, of all his good qualities, is he remembered this way?

Somewhere along the way we’ve been taught that a radical dichotomy exists between faith and doubt.  Faith is good and doubt is bad.  Faith builds up and doubt destroys.  Faith nurtures and doubt stifles.

Perhaps it is time that we ask if there can be any meaningful faith, any gutsy faith, where no doubt has preceded it?  Can we really know, for instance, the exhilaration that comes from suddenly becoming aware of God’s presence in our lives without first knowing the torturous ache of God’s seeming absence?  Can faith ever take on real depth and meaning without the honest wrestling that moments of doubt force upon us?  The question is not whether doubt is good or bad.  The question is whether faith can take root in anything else?

The time is long past for us to quit avoiding our doubts by flogging Thomas’ memory.  Brethren in the risen Christ, Thomas is us; and his story tells us more about faith than it does about doubt.

Thomas was absent from the gathering of the disciples when Jesus first appeared to them following that first Easter sunrise.  He had been a faithful follower during Jesus’ ministry. We can only guess where he was and what he was doing.  But it’s safe to say he was off somewhere grieving.  He had been caught up by this vision of a new kingdom Jesus talked about.  He had seen the miracles of healing; witnessed changed hearts; he had taken an active role in the shaping of the dream.  And it had been killed on a cross. Despair?  Yes!  Grief?  Certainly.  Doubt?  Probably.  He was trying to make sense of the tragedy at Golgotha which had jarred his every fiber.

There were doubts, for sure, and they were honest doubts.  What happened to the dream?  Was it all a big masquerade?  How can this kingdom of peace overcome the darkness of this night?

Is it any wonder, then, that when in the midst of his questions and grief and doubt, he returned to his friends, that he was totally unprepared for their excitement?  “We have seen the Lord!” they shouted to him, and Thomas, in his moment of darkness and confusion could only respond:  “Unless I see in his hands the print of the nails, and place my finger in the mark of the nails, and place my hand in his side, I will not believe.”  Is it any wonder?  Who wants to be set-up twice for that kind of disappointment and hurt?   Doubts?  You bet!  Honest doubts born of believing in someone with all of your heart, in a dream, and seeing the future cruelly shattered right before your eyes.

But eight days have passed and now Thomas is about to climb out of his valley of despair and grief.  Jesus came to His followers again with His greeting, “Peace be with you.”  And then, in that classic scene Jesus turned to Thomas and gave him his chance to touch the wounds.  Can you imagine the drama and the raw emotion of the moment?  Thomas, in an instant had hope reborn and faith rekindled, and responded with the highest confession we find in John’s gospel:  “My Lord and my God!”  The highest confession sprang from the deepest despair.  Thomas is no culprit.  He is not a rogue or a scoundrel.  He is us.

Out of the reality of doubt, the possibility for faith is born.  And here we need a word of caution.  Even the faith that is forged by despair and born anew in the resurrection is not immune to doubt.

We will always live with the paradox of faith and doubt as two sides of the same coin we call our lives.  And the reason for this is quite obvious.  Resurrection faith does not come to us like a package in the mail or a gift from grandma at Christmas.  We can never possess it as such, for one possesses things and faith is not a thing; it is an experience.

Like Thomas, when our experience of God begins to wane, we long for proof to beat away the gnawing doubts.  We want hard evidence, something we can cling to.  Yet, faith always comes as a challenge, as an adventure, and as such cannot ever be totally captured for all times and all places in one moment.  The decision to believe is one that sometimes entails doubt because we are those who “have not seen and yet have believed.”  And it is there that we learn what it means to walk with God.

The issue for us is never, therefore, one of avoiding our doubts as if that will cure us of them.  No, the issue for us is how to be good doubters; how to walk like Thomas honestly into the middle of them, no matter how scary and alone that feels, so that we can encounter the living God and have our own faith resurrected.  It is a paradox, like losing one’s life to find it, that doesn’t make rational sense… until we live it.  And then, out of the dust of honest doubt can be born the greatest expression of faith: “My Lord and my God.”