- His Eminence Metropolitan ISAIAH of Denver - 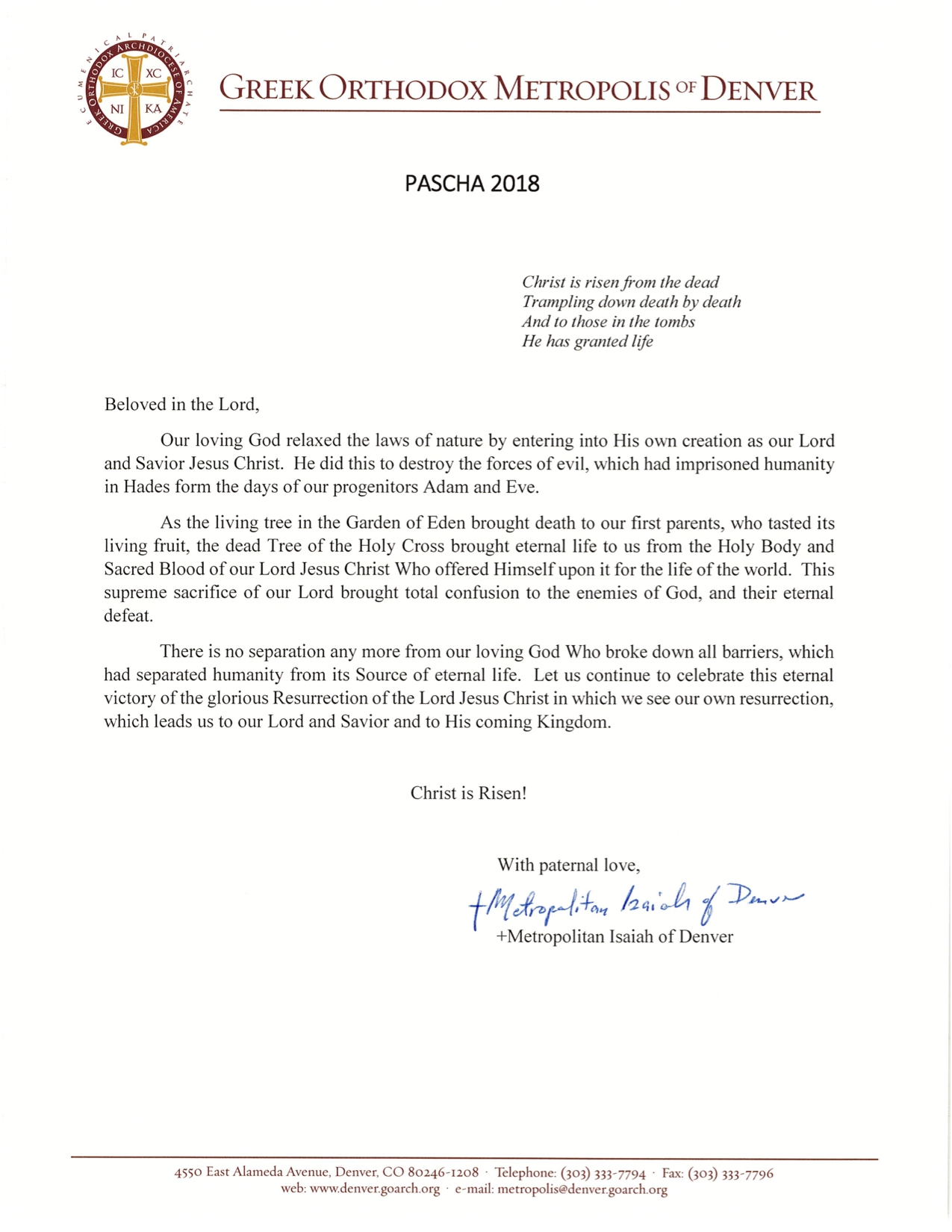 As we are continuing our annual spiritual pilgrimage of Great Lent toward great and Holy Week in order to commemorate and relive our Lord’s final days on earth as theanthropos, or God becoming human, but retaining His divinity, we are reminded how our loving God destroyed the power of the former archangel, Lucifer who had his kingdom in the depths of this earth called Hades, where every human soul from Adam and Eve had been imprisoned. From the days of man’s creation, due to the fall of our protoplasts with the deception by Satan in the garden, as we read in the first book of the Holy Bible, every human soul had been imprisoned in the darkness of Hades until the perfect human soul of our Lord, having left His crucified Body, descended there and destroyed its impregnable gates. His glorious resurrection hymn says it most clearly that He destroyed humanity’s death through His own death, releasing every human soul from that former prison.

Reflecting back into Holy Scripture, we read that God in the book of Genesis, after Satan had deceived Adam and Eve, told Satan, “And I will put enmity between you and the woman and between your sperm and her sperm. He shall bruise your head, and you shall bruise His heel (3:15.)” It was obvious that God was speaking of the Son of the Ever-Virgin Mary, Who would restore humanity to reunion with Him in His coming Kingdom.

From the book of Psalms, we read in the Greek Septuagint Old Testament translated by the Jewish religious leaders in Alexandria at least two hundred years before the birth of the Lord Jesus Christ the following:

I have begotten you from the womb before the existence of Lucifer. The Lord has sworn and will not repent. You are a priest forever, after the order of Melchizedek.

Who is Melchizedek? We are informed of this from the attributed writer of the Epistle to the Hebrews who is Saint Paul. In the seventh chapter of the epistle, Saint Paul writes that Melchizedek is “without father, without mother, without genealogy, having neither beginning of days, nor end of life, but made like the Son of God, remains a priest continually.” Who else can this be but the Lord Jesus Christ Who has no beginning and no end? Obviously, the name Melchizedek is one of several names which our Lord Jesus Christ is given in the old Testament. He is the Ancient of Days; He is Emmanuel; He is the Eternal Word of the Father; He is the Lord Jesus Christ.

On the basis of this truth and this reality, in the entrance hymn of the Divine Liturgy of Christmas in the Orthodox churches, the celebrant chants from the Book of Psalms that the Word of God was begotten from the womb of the Father and that He is a priest forever after the order of Melchizedek. Naturally, for one to be begotten of the Father means that He existed before time began. And, we know from the Holy Scriptures and the history of the church that the Father has only One begotten Son.

The significance of all this information is that Melchizedek, who appeared to Abraham after his decisive victory over the king of Sodom, offered to Abraham bread and wine. This was long before the Levitical priesthood had begun with the tribe of Levi and Aaron becoming the first priest of the Old Testament priesthood. The offering of the bread and wine by Melchizedek is definitely prophetic of the New Covenant priesthood of the Church. For we easily recall the words of our Lord at the Mystical Supper with His twelve disciples and apostles which are recorded in all three of the Synoptic Gospels of Saints Matthew, Mark, and Luke, when the Lord offered to them the bread and the wine of the Mystical Supper.

With Christ our Lord coming into the world, the covenant that had established the Levitical priesthood for thousands of centuries with hundreds of thousands of priests offering the blood of thousands upon thousands of animals for the washing away of sins had ended. The Lord Jesus Christ came as the One and Only Priest of the New Covenant, offering His Body and Blood as the only Sacrifice that was necessary to destroy the control by Satan of all human nature. The old law was not necessary anymore. For it was replaced by the unending love of God for His icons, humanity, and by His eternal grace.

The Lord Jesus Christ gave birth to His Holy Church, which has given eternal life to its people and continues to do so even to the day when He returns in glory as the Bridegroom of the Church to gather His bride, His people, for His eternal Kingdom. One priesthood has done this wondrous and divine act and one Sacrifice has given eternal life to those who have recognized Him as our loving God Who humbled Himself so greatly because of His great love for us.

Even though the world is yet victimized by the forces of evil, the love of God has never left us nor will it. For when evil exists, the grace of God is ever more present. Because of this, our joy once again comes forth, especially during the first three evening services of Holy Week of the Nymphios, the Bridegroom, when we are reminded that He is returning in glory to gather His people for His coming Kingdom. Behold, the Bridegroom is coming in the midst of the night!

Saint Paul the Apostle clearly states that the Lord brought about the new and eternal priesthood after the order of Melchizedek, as the only priest. He did so by offering His holy Body and sacred Blood (Hebrews 7:27). This was the only Sacrifice that was necessary to save humanity and the world. As the only begotten Son of the Father, He defeated Satan whom He had created. Satan, thinking that Jesus Christ was a descendant of Adam and Eve, with the fallen nature, apparently ignored God’s words in the book of Genesis stating that he was to be defeated. He never imagined that the Lord Jesus Christ had created him, as He had created all the nine orders of the angelic world, and was the only one Who would take away his power which brought disaster and death upon the world.

Consequently, the Judaic Law which washed away the annual sins of the Hebrew people was no longer necessary. It was replaced by the Bread and Wine which Melchizedek offered to Abraham before God’s people began to follow and to believe in the one, true God. The new and Eternal Covenant now is in the Church, the Lord’s spiritual Body and sacred Blood, which represent the Eternal Love Who is God with His saving mercy, grace, and peace.

Metropolitan Isaiah is a native of New Hampshire, having been born in Portsmouth. He is one of four children born to Dennis and Mary (Kapsimalis) Chronopoulos who had emi
[click here to view all Living Faith posts]
“Our mission is to share Orthodox Christianity throughout Cheyenne and southeastern Wyoming. We do this by actively sharing the teachings of our faith, positively impacting the community through our charitable work, and enhancing the spiritual growth of our members.”

Metropolitan Isaiah is a native of New Hampshire, having been born in Portsmouth. He is one of four children born to Dennis and Mary (Kapsimalis) Chronopoulos who had emigrated to the United states from Olympia, Greece. After his primary and high school education, he served with distinction in the United States Marine Corps during the Korean conflict. In the autumn of 1954, he enrolled at Holy Cross Greek Orthodox Seminary in Brookline, Massachusetts. Upon his graduation in 1960, he attended the Ecumenical Patriarchate Seminary of Halki in Istanbul, Turkey for graduate studies. On February 25, 1962, Metropolitan Isaiah was ordained a deacon by His Eminence Archbishop Iakovos at Saint Spyridon Church in San Diego, California, having been tonsured a monk on the previous day. He received his ordination to the holy priesthood from His Grace Bishop Demetrios of Olympos at Saint Sophia Cathedral in Los Angeles, California, on March 18, 1962. His first assignment in the Greek Orthodox Archdiocese was as assistant to the pastor at Holy Trinity Church in Salt Lake City, Utah. In December of 1964, he was assigned as pastor at Saint John the Baptist Church in Youngstown, Ohio. On November 30, 1969, he was raised to the office of Archimandrite by Archbishop Iakovos at the consecration services of the new church and community center in Youngstown. Archbishop Iakovos reassigned the Metropolitan to Hellenic College and Holy Cross School of Theology as the Director of Student Life in August of 1971. Taking a leave of absence from his duties in February 1975, he enrolled as a graduate student at the School of Theology at the University of Thessaloniki, fulfilling requirements for the recognition of his master’s degree in theology. He returned to the United States in July of that year and continued in his capacity as dean of students. In September 1976, he was given additional responsibilities at the college-seminary as the Dean of Administrative Affairs together with his position as Dean of Students. In October 1977, he assumed additional duties as the Interim Pastor at Saint Nicholas Church in Portsmouth, New Hampshire. Relinquishing all of these positions in March 1979, he was assigned as the Chancellor of the Diocese of Chicago under His Grace, Bishop Iakovos of Chicago. Metropolitan Isaiah was elected to the rank of bishop by the Holy Synod of the Ecumenical Patriarchate in Istanbul (Constantinople), Turkey, on April 10, 1986. He was consecrated a Bishop on May 25, 1986, at Holy Trinity Cathedral in New York City, and was given the title of Bishop of Aspendos, a former Christian city in southwestern Asia Minor. In September 1986, His Eminence Archbishop Iakovos assigned him as the Chancellor of the Archdiocese in New York. Bishop Isaiah continued to function in this capacity until June 23, 1992, when he was elected Bishop of the Diocese of Denver by the Ecumenical Patriarchate, taking the new title on June 24, 1992, at special ceremonies in the Archdiocesan Chapel. He was enthroned as Bishop of Denver on September 10, 1992, at the Greek Orthodox Cathedral of the Assumption of the Virgin Mary in Denver, Colorado. On November 24, 1997, the Holy and Sacred Synod of the Ecumenical Patriarchate elevated him as Metropolitan of Proikonisos and Presiding Hierarch of the Greek Orthodox Diocese of Denver. Metropolitan Isaiah was also appointed as President of Hellenic College/Holy Cross Greek Orthodox School of Theology on July 1, 1997, by His Eminence Archbishop Spyridon of America. He accepted a one-year term which officially ended on August 14, 1998. On December 20, 2002, the Ecumenical Patriarchate elevated the status of the Diocese to a Metropolis, and in 2003, elected Metropolitan Isaiah as Metropolitan of Denver.